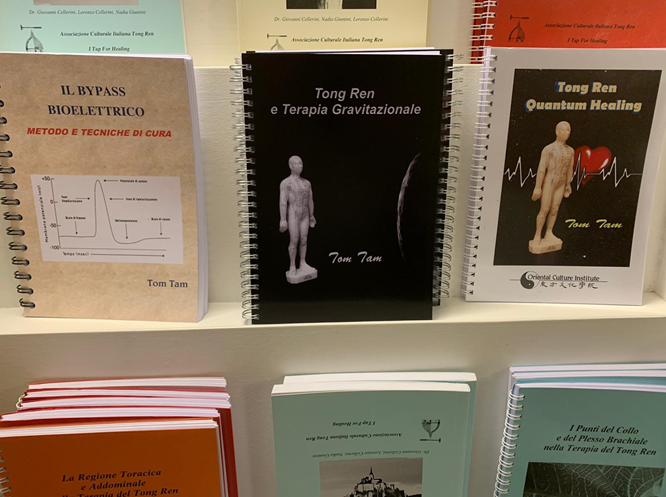 The latest book written by Tom is Tong Ren Gravitational Healing. The last printing was in July 2018 and by now many people throughout the world have read it, used it to learn the new healing ways and of course practice them. This is an introduction of the latest pieces of Tom’s work that has been translated in Italian by Tong Ren Italia.

I will like to report here few lines from it. This is what Tom states: “I have had a successful healing practice in Boston for 35 years. Now is the time for me to step into retirement to enjoy the rest of my life. Yet the truth is how can I stop working? The world still has so many more untreatable diseases than treatable ones. Of course my healing ability is too tiny to heal this whole world but my healing theory and philosophy may help many people who have lost hope”.

I am writing this note in October 2020 and Tom Tam is in a continuous evolution in his research, based in the pure fact of Science, applying its theory in his research to new ideas in ways to heal the untreatable diseases.

His book has been translated in Italian recently and it will be presented at the next seminar in Verona, the 16 and 17 of October. Giovanni and Lorenzo Cellerini will enlighten the attendee on the communion of Science and Healing that Tom has presented to us during his general healing treatments.

And again I will like to take few lines from the seminar manifesto , that will be also presented by two speakers from the School of Wellbeing, Stefano Gibertoni and Barbara Moschetti.

Below is a translation of the forward and presentation written by Dr. Giovanni Cellerini, a very dear friend to Tom Tam and a founding member of Tong Ren Italia responsible for sharing Tong Ren Healing and helping tens of thousands of people in Italy and worldwide.

“Tong Ren is a very effective energy rebalancing and self-healing technique, precious today more than ever because it is practicable even at a distance. During the days of lockdown, in fact, it has allowed many holistic professionals to carry on their work of energetic support of clients, leveraging on one of the fundamental characteristics of Tong Ren: the transmission of the recovery information of Well – Being in the quantum field. Participation in the course does not require specific preparation in Traditional Chinese Medicine. In order to fully enhance the effectiveness of the technique, it is however important to understand its fundamental principles.”

The translated book with the Scientific theories applied by Tom has already caught the attention of Gabriele Boracchi, Engineer of CERN ( the European Organization for Nuclear Research ) and he is looking forward to study the scientific application of Tong Ren. The Eng. will participate, via video to the 10 years celebration of Tong Ren in Italy.

The foreword of the book from Doc. Giovanni Cellerini follows with a final note by Lorenzo Cellerini.

The intuitions of Tom Tam arise spontaneously, gushing impetuously like the water of one cascade and are immediately applied. Intuitive speed and the ability to design do appreciate this unconventional scientist and, as such, uncomfortable for most people. His studies always proceed very rigorously, in order to reconcile neurophysiology Western with traditional Chinese medicine. I believe this dominant thought is the basis of his search for life and represent the very essence of his person.

I am going to talk about an acupuncture master, Qi Gong and Tai Qi born in China and transplanted in America, under another sky, another culture, a different way of thinking and a different expression verbal and mimicry. Just thinking about it echoes in my mind Dvorak’s “Salutation to the New World”, which conveys the sadness of what is left and, at the same time, the joy for future possibilities. Tom Tam’s experimentation does not only express the individual will to seek and to understand, but that of humanity on the way to the light of truth.

Reconciling TCM and western medicine makes it possible to reason between distant worlds geographically and culturally, distinct in the analytical Cartesian reasoning and in the analogy Taoist, so well expressed by ideograms, producing a message of peace, hope and union between peoples.

Neurophysiology becomes the dictionary that helps a western doctor to decode a text of Traditional Chinese Medicine and a Chinese health care professional to express the depth of his reasoning e the consequent therapeutic actions.

What has been said about Tong Ren represents a message of union and understanding in a world increasingly selfish, where the protectionist financial policies that led have been implemented social alienation even before the distancing occurred during the COVID-19 pandemic.

The isolation of the person, in a world made unlivable by the law of profit and overpowering, overcomes the will for peace and freedom, destroying creation. In a world so desired, how can the person have a sufficient supply of oxygen, which is necessary so as not to incur in diseases that alter cellular metabolism up to modify DNA e lead to cancer? How bioelectricity will produce the necessary positive nerve stimulation effects for the metabolic and neuroendocrine balance of our body? How will bioelectricity and piezoelectricity help keep us physically and psychically balanced in a world in to which chemical and pharmacological research seems the only answer to human health?

Maybe this is a new period of obscurantism in the hands of the archetypes, as in the last war, where the eagles of the Roman legions praised the extermination and supremacy of the race. The refusal of other possibilities of treatment, if not the chemical way, suggests how high the unconscious collective is imposed by people with blinders, who want to run towards unethical profits, of few to the detriment of the many.

Unlike trotting or galloping horses, these people set limits themselves, perhaps to defend oneself from the sight of the sufferings brought to others and not to disturb the memorization of the own mirror neurons. It will be necessary to increase brain wave activity in the Jungian collective unconscious, be increasingly interconnected in internet-quantum therapy to defeat this limitation of thought that pushes scientific experimentation at will, considering only what it is wants to consider, with a view to the objectivity of Newtonian physics and its limitation.

So, the invitation from me, to change this world of abuse, is to increase the unconscious level with collective (classes) and individual treatments. In this book, moreover, we investigate the magnetic fields which, placed orthogonally to the axis electric, they amplify the therapeutic possibilities.

Tungsten is an easy-to-use material that has the purpose of disintegrating gravitational force of cells in the formation of a bioelectric block. The fascinating aspect of quantum medicine and the use of quantum physics are also addressed with

the use of the human model (doll), the gavel, the laser and the fingerprints. Finally, in this text, the scenario opens up regarding the research on cells and animals made by NASA in space travel and on the applications of gravity in the therapeutic and regenerative field.

There is also a future for anti-gravity treatments, such as in prolapsed, and the modification of matter with the use of fields that interact with Earth’s gravity. As we can understand Tom never ceases to amaze us, for his freshness, spontaneity and youthfulness of ideas. To our scientists it may seem like a science fiction book, scarce scientific value, but to attentive, prepared doctors who know how to read between the lines, it opens wide therapeutic possibilities and makes you think and think.

I would say that this is the fundamental message to be given to the reader: the possibility of thinking. When everything is now stereotyped, standardized, approved, it’s nice to hear a voice coming out of the chorus, who says to you: “You are not alone in your journey, continue your path as a free man and doctor!”

An addendum from Lorenzo Cellerini

“On November 12, 2018 Tom Tam handed me a copy of this book, to bring to my father, along with this message, written by him for our community in Tong Ren, which reads verbatim: “Things are grouped by genres, people are divided into groups “(translation Laura Caretto).

Tom wanted to tell me that our world of study and research is represented by a common affinity towards know.

The same Dante’s logic that we find in the famous phrase “Consider your seed: you were not made to live as brutes but to follow virtue and knowledge “where transcendent knowledge is the real reason for human existence.”