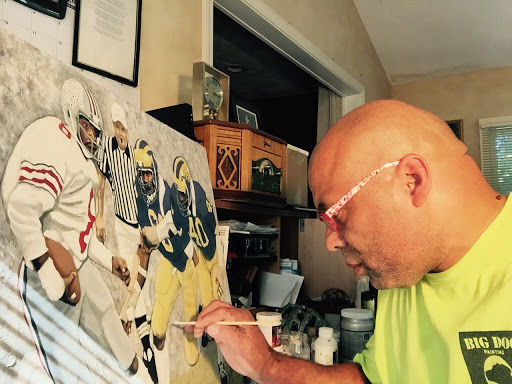 In March of 2016 my wife noticed that I was getting up between 8-10 times per night to urinate. She asked me how long had this been going on. I told her that i have been doing this for a few months but i didn’t give it much thought. My wife ,who is a Nursing professor suggested that I go to the doctor ASAP. They ran blood tests and discovered that my PSA level was 69. This is very high as the normal range is between 0-3.

After many weeks of tests and scans i finally got the results at the beginning of May. My doctor informed me that I had stage 4 prostate cancer and that it has spread to my spine and tailbone. I didn’t realize it at the time but he was giving me 3 years to live. I didn’t like his conclusion so I got a second opinion from a team at a local cancer clinic. They felt that an aggressive approach would be much better for me. They agreed that 6 rounds of chemo and 10 weeks of radiation was my best choice.

The day after the initial diagnosis I called Tom Tam’s office. Fred suggested that I come to the Tong Ren Healing class later that afternoon. I came with Milt, the friend that told me about Tom. I was so scared. I told Tom about my condition and he began tapping this little acupuncture figure. I must admit that it seemed a bit strange, but my hands began heating up. Tom was not intimidated by my condition in the least. Later after class, several men came up to me and put me at ease. They all had previously struggled with prostate cancer and were now cancer free.

Tom told the class about a new machine that he just developed. I purchased the Tong Ren machine on the first day. I had no room for doubting. The first night that I wore the Machine I only got up to urinate 2 times. I was so happy that I told my entire family and many of my friends. Several of my friends ordered the machine for themselves and are very happy that they did.

My urologist had given me some hormone pills to bring down my testosterone levels. But I never took them. I wanted to see if Tom’s techniques were working. I went in for a blood test and my doctor proudly stated that my PSA has come down from 69 to 47 in just a few weeks. He said that the hormone pills brought it down by 22 points. I said no doc I never took your pills. He asked me how it happened and I told him about my Tong Ren machine and the Tong Ren Healing class. He was shocked. He said that he had heard of Tom. Two weeks later it came down to 34. This is less than half of what it started out.

I eventually took the hormone pills and the hormone shot. A week later I took my first dose of chemo intravenously. The next day I took a shot of Lunesta. Two days later I began to feel worse than I ever have in my life. I felt like I was naked, wrapped in saran wrap from head to toe, laid out on the floor with a gorilla on my chest. I felt like I was being suffocated from the inside. All I could do was cry. I had no energy and I thought that I was going to die. I went over to Tom’s healing center and sat in his office and cried. Tom said get up and drink my new water. I didn’t realize it but he had manipulated the water with quantum physics. I immediately began to feel better. Tom gave me a hug and told me that I would be ok. He later showed me how to change the water by using the machine that I purchased from him at the first class.

I told my doctors that I was not going to take anymore chemo, radiation or hormone shots. My urologist called me and told me that if I didn’t take the hormone shot that I would die. I told him, thanks for your concern and if I changed my mind that I had his number.

My oncologist said that stopping the treatments should not be a problem, seeing that my blood work looks so good. My primary care doctor said that this is a miracle. In all of her years she has never seen cancer reverse like this.

I have been attending Tom’s healing class for almost 6 months. I have lost 38 pounds. My blood pressure was 150/95 with 4 meds now it is 136/79 with one pill. My prostate number has come down from 69 to 6 point 3. My energy level is coming back and I am playing basketball once again. I am not suffering from sleep apnea any longer. Tom’s healing class is a weekly adventure, learning a new technique and quantum physics principle each time. I am no longer fearing death. I am enjoying my life like never before. I have discovered that life is such a gift. I am so grateful for the 30 cancer fighter classmates. We have become family. Everybody has your back. Tom teaches us to fight cancer with a positive attitude and never give up. Don’t give up no matter what the doctors say.

Thanks Tom for all of your work and sacrifice. You could use your gifts and knowledge for the rich and famous and become a very wealthy man. But you are giving hope to all who come for help regardless of social status. Thanks Tom for giving me a new lease on life.

Please join one of our many local Tong Ren Healing classes.
Click here for more information