Friday the 12th, I was able to take a jump from my town to Florence to deliver the latest and greatest, but not the last, from Tom to the Tong Ren keepers in Florence. I met Doctor Giovanni Cellerini and Lorenzo (practitioners of Tong Ren in Italy) at a bar and we exchanged the usual Italian greetings with hugs and kisses (on both cheeks), We then sat down and sipped an aperitif. Giovanni gave me the following report, highlighting their work. 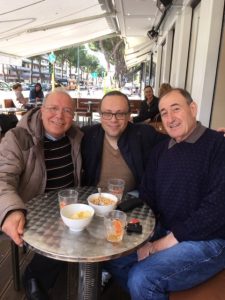 Three weeks ago, a man around 50 years old from Turin walked in my office, with muscular atrophy multi systemic, which was very rare. He is under treatments for three years in the local hospital. He was held up by his wife when they walked in the office. His arm was tight to his body, walking like a penguin. His body was very rigid and he had breathing difficulties and was not able to go up the stairs. His worst problem is when he goes to bed after they lay him down, he is not able to move or turn around at all because he is so rigid. He loses his balance easily.

After three days of tong ren treatments from Giovanni and Lorenzo, he was walking with no help around the office, able to get up from a seated position, and able to dress himself and button his shirt when before he was not able to move his fingers. If something fell on the floor, he was able able to pick it up and go back to a standing position with ease. Now he walks out from the office to go to his car. At the end of the three days seeing that kind of progress, his wife was crying and he said to Giovanni, “I spent three years in an hospital with no significant improvements and in three days here I am almost well!” “His equilibrium is not totally okay, but I am (Giovanni) confident that continuing the therapy will improve things a lot.”. This is a very strange case and all of us in the office are very touched by the progress. A very young doctor, Giulia, that works with us, (she has not met Tom, only Yvonne ), was shocked by the results and so was Lorenzo who was also treating him. The man’s wife was crying with joy and said that now he walks very fast to go to the car and is breathing well. This has been the greatest success for us! I did not know anything of the sickness, but only the points where the blockages were and I worked on them. If I did not know them, I do not think that I was able to cure him.

We are also taking care of patients with multiple myeloma, lung cancer, and one person with small cells lung tumors. The person with small cells lung tumors is doing well, even when he was not seen by a doctor for four months. I found that he had a pleural problem causing him insufficient breathing. After resolving the pleural problem, we noted that the tumor was reduced in size.

I am working now with a patient with sarcoma and one with Parkinson’s who is doing well. A colleague of mine from Naples has been taking the train up for the last two years, coming every three weeks and now when he talks about Parkinson’s, he claims that he has little trouble writing prescriptions, not because his hand shakes (it does not), but because he gets tired to write them.

We also have a case with fibromyalgia that doctors do not know how to cure, Crohn’s, ulcerative colitis, and arthritis that are all doing well. Even Aurora is proceeding cautionary good. I have not yet done a liver test to look at it, but the ultrasound are showing a reduction in size and the only problem is the chemotherapy that has toxicated her. I have many colleagues that come to me to be cured and are very happy with Tong Ren.

We will go to Verona soon and I will give a class in May to probe the environment and then in September/October, we will try to organize something. Lorenzo is explaining that if the class will do well and the school will like it, then a presentation for Tom will be organized. There may be the opportunity in the future for Tong Ren to be taught in the school.

We treat around 30 patients a day (Now I, “Angelo” know why they do not work on Friday.) My first patient comes at 7am until 7pm and sometimes we skip lunch. Roberto, who has hereditary spastic paraplegia is doing well and brings in some food to the practitioners for lunch. Tom, you were right that the first time you saw him you found a wound in the marrow and there is also a reduction of the muscle bundles and an atrophy of the cerebellum. He is doing so well and he is playing tennis even in a wheelchair. His physical activity is improving his well being! Lastly, a patient with an ictus who was not able to talk had a few acupuncture sessions and at the end he started to regain his speech. The only words he was able to say were a river of bad words!

My best to all of you,

Tong Ren classes are offered online and in-person all over the world. To find the closest Tong Ren class near you, please see our map that includes where and when classes take place. If you are unable to make a class in person, we encourage you to join our live broadcasts online, which provide the same benefits as being in-person. Tong Ren classes are open to the public and operate on donations to expand our offerings at no cost to those who need it most. We appreciate your donations to help us continue our work. If you have a testimonial you’d like to share about how Tong Ren has helped you, please let us know!